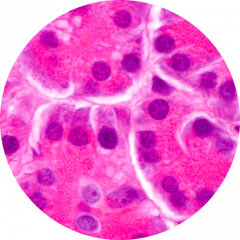 A specific set of calcium-transporting ion channels known as CRAC channels are responsible, among other things, for replenishing the calcium stores in the endoplasmic reticulum, or ER. The two principal proteins that comprise CRAC channels are the ER calcium-sensing protein Stromal Interaction Molecule 1 (STIM1) and the cellular membrane calcium channel protein Orai1. When cells are stimulated in particular physiological ways, intracellular messengers are generated that cause the periodic release of calcium from the ER. The release of calcium from the ER is then sensed by STIM1, which unfolds and activates, or opens the Orai1 calcium channel triggering an influx of calcium into the cell. In certain pathological conditions, however, CRAC channels can be activated in non-physiological ways, such as by a toxin that can cause excessive release of calcium from the ER, leading to overactivation of CRAC channels. Depending upon the extend of activation and the cell or tissue involved, calcium influx through CRAC channels can regulate calcium-dependent inflammatory pathways or can activate cell injury pathways. For example, in immune cells like T lymphocytes, activation of CRAC channels plays a key role in initiating the adaptive immune response and the generation of inflammatory cytokines. In certain acute critical illnesses such as AP, CRAC channels on affected organ tissue cells can become overactivated, resulting in excess calcium entry that is toxic to cells, causing cellular injury or death that can exacerbate an accompanying inflammatory response.

There is strong genetic evidence linking STIM1 and Orai1 to the way the cell replenishes its calcium stores and to the physiological consequences of disrupting that replenishment. At the cellular level, manipulating STIM1 activity by genetic inactivation or enhancement has been shown to impact calcium transport. Inactivating STIM1 was shown to decrease calcium entry into cells, whereas creating mutations in STIM1 that enhance its activity were shown to increase calcium influx1. At the phenotypic level, people with homozygous genetic deficiencies in the genes encoding either Orai1 or STIM12 develop the life-threatening condition of severe combined immunodeficiency (SCID). These people lack the ability to mount an effective immune response, so they are at extreme risk of contracting life-threatening infections3. Individuals that are heterozygous for these do not have any notable conditions due to or associated with these genetic deficiencies.

An essential messenger for intracellular signals, calcium plays diverse and important roles. Among other activities, it regulates biological processes such as nerve signal transmission, muscle contraction, inflammation, vascular permeability and cell death. The storehouse for calcium in a cell is a compartment called the endoplasmic reticulum, or ER. When an outside signal stimulates a cell, the stored calcium is rapidly released from the ER in a pulsatile manner into the cell interior, resulting in activation of a number of key processes affecting synthesis of other signaling molecules, cell growth, differentiation and division. In response to external stress on the cell, release of calcium from these intracellular stores activates CRAC channels, causing even more calcium to move into the cell, and this calcium overload can trigger cell death.